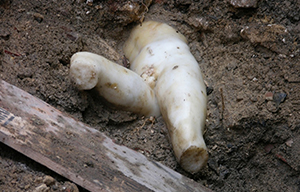 Archaeological Research and Study of the Topography of Shallalat Gardens in Alexandria, Egypt

The Hellenic Research Institute of Alexandrian Civilization (H.R.I.A.C.) started an archaeological survey at Shallalat Gardens of Alexandria in 2007.This area was considered to be empty of antiquities. However, its position in the topography of Ptolemaic Alexandria was very important, as it was a part of the Royal Quarter, according to the ancient sources and especially Strabo. The excavation was held in the NW side of the park. On May 2009, a unique work of art, an early Hellenistic marble statue was discovered. The type of the statue, its features and attributes of the head, the pose of the neck, the proportions and the movement are elements which suggest the connection of it to the portraiture of Alexander the Great. In autumn 2015 in the same area, in a depth of 10, 00 m, big stones of white limestone were uncovered, that possibly belonged to the foundation of a monumental public Hellenistic building of the Royal Quarter. The next years, a lot of finds were revealed, among which, a hydraulic Roman structure, with a tunnel under it, many later constructions, a part of a Roman mosaic, and, the most important, a big part of a Roman road of 4th century A.D. This road has been already documented as the L2 Street of the map of Mahmud Bey El Falaki of ancient Alexandria. The excavation is in progress and the research will be expanded in more areas of Shallalat Gardens.