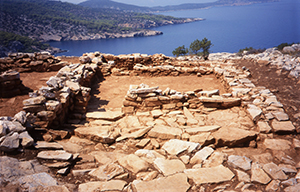 The Early Helladic settlement at Kavos Vassili on Poros Island

Archaeologist - Director Emerita of the Ephorate of Antiquities of Piraeus and Islands, Greece

The excavations conducted by the Greek Archaeological Service at Kavos Vassili, a small promontory in the NE part of Poros Island, brought to light a significant EH II settlement, offering a new example of the early urbanization observed in Greece during that period. On account of the surface house remains, the settlement is estimated to have occupied an area of ca. 15,000 m2. Three large buildings and three subsidiary structures were investigated in NW section of that area. The architecture and certain finds display influences from major EBA sites in the Argolid, from Attica, Aegina and the western Cyclades, and even from the NE Aegean and Crete (cylindrical dippers, “Hammer type” seal), the latter presumably transmitted here through commercial contacts with Attica, where similar finds have occurred. This settlement may have played an active role in the EBA trade of millstones, given that the southern part of Poros was rich in andesitic rocks.