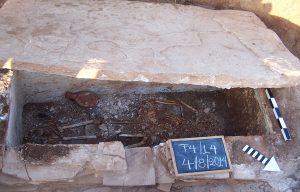 The site of Paravela lies approximately 1,5 km northwest of the present-day town of Argos Orestikon in Western Macedonia (Kastoria Prefecture) in Northern Greece. A systematic excavation, under the joint auspices of the University of Athens and the University of Patras, has been underway since 2009. The project continues earlier research in the area, undertaken briefly by the late Th. Papazotos in the summer of 1991. Digging a number of Early Christian basilicas and parts of the city’s fortification, Papazotos was able to identify an archaeological site in the outskirts of Argos Orestikon with the city known as Diokletianoupolis, which apparently was situated in the area before the Emperor Justinian moved it to a more suitable site under present-day Kastoria. Papazotos himself discovered on the nearby site of Paravela, under a later extra muros Christian basilica, a building, safely datable to the time prior to the reign of Emperor Diocletian. The building, dug by Papazotos only partially, has never been published and has not been duly incorporated into accounts on the area, even though it could shed light to some crucial historical and topographical questions. It is our belief that the building served as the seat for the “Koinon (League) of the Orestoi” - a federation-like body of the region’s cities. The building consisted of a smaller assembly house and a larger, rectangular quad. Our initial task is to confirm this view and investigate the relationship of the building with any further remains of the ancient city still underground. Between 2009-2016, we have been able to establish that after the building was abandoned in late 3rd c. AD, its grounds were partially reused as a burial site between approximately AD 340-400, at which time, or slightly later, the Christian basilica was erected.