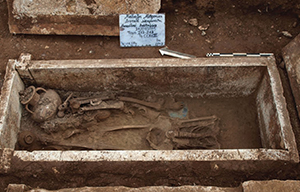 Amvrakia was founded by Corinthian settlers in the late 7th century BC in the area where today stands the city of Arta. The city, which was protected by a strong fortification wall, was developed on the basis of a well-organized urban system. Its administrative and religious center with monumental public buildings and temples is located in the northwestern part of the ancient city, while the remaining area was occupied by houses. On the other hand the two cemeteries of the city were organized in the area outside the walls. The cemeteries of Amvrakia consist of the main subject of the ongoing research program Ancient DNA analysis in novel multidisciplinary approach of ancient Corinthian colonization. Ancient Amvrakia and Ancient Tenea as demonstration examples, with the abbreviation APOIKIA. This project aims in partnering the archeological science with the fields of bioarchaeology, archeogenetics and museology, in which the monuments and the human remains are studied under innovative technologies, in order not only to strengthen the scientific research, but also to provide new evidence on the cultural development of the past. Central to this issue is the colonization of the region of Arta by the Corinthians at the end of the 7th century BC, and more specifically the biological imprint of the Corinthians on the indigenous population of Amvrakia and its subsequent demographic development.