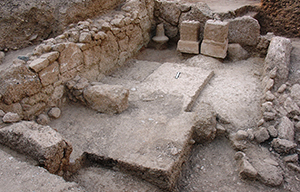 Archaeologist, Director of the Ephorate of Antiquities of Ilia, Ministry of Culture and Sports, Greece

Extensive archaeological investigations in Aigialeia over the last years have brought to light many new sites, mainly settlements, as well as sanctuaries. Specifically, an extensive EH settlement has been located at Keryneia during the works for the construction of the Olympia Highway. The archaeological remains were quite dense and cover a wide chronological range, of at least 500 years (EH II and EH III periods). In 2004 an apsidal temple of the Geometric period has been excavated at Nikoleika, in the territory of ancient Helike, which perhaps should be identified with the well-known sanctuary of Helikonios Poseidon, mentioned by the ancient authors. Moreover, the systematic excavation of the archaeological site on the peak Profitis Elias at Mamousia (ancient Keryneia) has brought to light an ancient sanctuary: the peristasis of a great peripteral temple of the late 6th century, the foundations of a large altar, as well as the remains of a distyle in antis temple of the 4th century. Furthermore, the building remains of the sanctuary at Marmara were detected during the opening of trial trenches on the course of the Olympia Highway. The shrine was dedicated to Demeter and its use dates from the Archaic to the Late Classical/Early Hellenistic period.