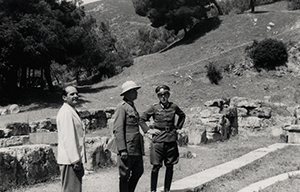 Scientific associate of the German Archaeological Institute at Athens

The links between archaeology and politics, and archaeology and war, have received a lot of attention recently – not only in Germany, but also worldwide, including in workshops, at congresses and in anthologies, with particular emphasis on the wars of the first half of the Twentieth century. As part of the «Cluster 5» network, the German Archaeological Institute has also been examining its own past. The main focus is on the actions and responsibilities of its leading staff during the National Socialist era. In July 2016, the DAI Athens launched the project «Reappraising the History of the German Archaeological Institute in Athens during the National Socialist Era». The aim is to conduct a detailed and critical study that will eventually form a monograph. In this text, our contribution and some initial results are presented.