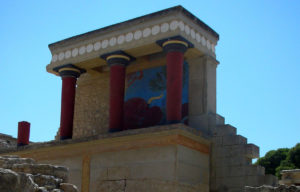 Archaeology in Crete in a revolutionary period, 1878-1913

Archaeological Policy in the Late Ottoman period and the Cretan State

This paper deals with the period 1878 -1913, in which the Archaeology of Crete began. It was a revolutionary period, as Crete was part of the Ottoman Empire until 1898, and a semi-dependent state from 1898 to 1913, when it was united with Greece. In 1878, a merchant from Heraklion named Minos Kalokairinos revealed the western part of the palace at Knossos. Unfortunately he dated his discovery incorrectly, since he thought that the ruins were the Greek andreion (a public building for city officials). The Educational Syllogos of Heraklion, with Joseph Hazzidakis as president since 1884, functioned as an archaeological service and rescued monuments, as the Great Inscription at Gortyn and the Idaean cave, and established the Archaeological Museum in Heraklion. After 1898, as director of antiquities and of the Museum, he explored the Archalochori Cave and tombs at Gournes and Gazi; he excavated Minoan villas at Tylissos and discovered the palace at Malia in 1915. Italian archaeologists had worked in Crete since 1884, when Federico Halbherr had assisted Hazzidakis with the Great Inscription and the Idaean cave. After 1900 the Italian mission under Halbherr focused its interest in the Mesara plain, south Crete. Here, Halbherr and Pernier excavated the palaces at Festos and Agia Triada and their cemeteries. At Gortyn they excavated the Odeion, the sanctuary of Apollo and other monuments. Chance reserved the full excavation of the palace at Knossos for the British archaeologist Arthur Evans. He had uncovered the whole palace only in 6 years, and published the excavation in 6 volumes. He also excavated some houses and the cemeteries. Evans is considered as the creator of Minoan archaeology, as he established the name Minoan to the palace and the prehistoric civilization of Crete. Hazzidakis was succeed by Ephor Stephanos Xanthoudides, who excavated the oval house at Chamezi, Siteia, in 1903, the cemeteries at Mouliana, Sitia, and megaron Nirou at Kokkini Chani, a tomb at Pyrgos and the tholos tombs in the Mesara plain.