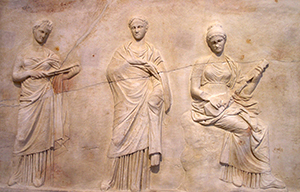 Praxiteles and his Age

Praxiteles and the sculptural production of the Late Classical Period

Τhe late Classical period, namely the 4th century BC is a thriving period for Greek sculpture. The mature Classical style of the 5th century BC is still influential during the first decades of the period, while its final decades are characterized by multiple changes signaling the transition to a new era. Great masters of the 4th century BC are active during this period. These are first and foremost Praxiteles and Lysippos, but also Leochares, Euphranor, Skopas, Bryaxis, as well as Kephisodotos and Timotheos, the elders. On the whole, the work of these great sculptors of the 4th century BC altered the orientation of Greek sculpture, bringing forth innovations that shaped its character during the Hellenistic times.