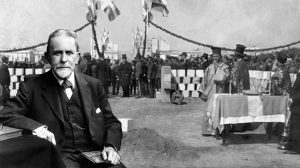 Sir James Frazer and Greece of the Interwar Period

Sir James Frazer was a contemporary (and acquaintance of) Sir Arthur Evans. The two men were much engaged in the political and historical situation of Greece of the Interwar period and both were great admirers of Eleutherios Venizelos. On one occasion, Venizelos was officially cursed by one of his opponents (a royalist priest) who incited his followers to throw a heap of stones on Venizelos’ imagined body. Frazer published a scholarly article condemning the method and analyzing it as a remnant of primitive magic. This incident shows not only how deeply engaged Frazer was in Modern Greece, but how he viewed magic and as evil remnant of earlier ways of life. One of his major contributions to European intellectual history was his faith in civilization as a superior form of human achievement. Unfortunately, Hitler’s rise in Germany (and the crimes that followed) shook his faith in the gradual but steady progress of mankind. Still, he maintained that reason will lead to better forms of civilization. He ends his article on the Cursing of Venizelos by noting that the heap of stones was covered by flowers thrown by people next day: “By the flowers, which next morning covered the shameful heap of stones, Greek patriotism converted insult into a homage to the true leader of Greece.”