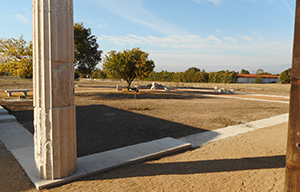 Director of the Ephorate of Antiquities of Pella

The excavations of Pella started in 1957. On June 9th 2017, the Ephorate of Antiquities of Pella organized an event to celebrate the 60th anniversary of the archaeological research. Four archaeologists who worked for a short or longer period in the excavations at Pella, Katerina Rhomiopoulou, Petros Themelis, Chaido Koukouli and Maria Akamati, were invited to present their memories and experiences as young archaeologists at Pella. The ancient city was founded on the coast of the Thermaic Gulf by the end of the 6th cent. BC. Because of its geographic location, Pella was chosen as capital of the Macedonian kingdom in late 5th or early 4th cent. BC. In the beginning the city was a small and unimportant and grew larger during Philip’ II reign. After Alexander’s expedition to the east and the wealth that was brought back to Macedonia, the city grew very large and was transformed into an urban center. As the capital of the Macedonian kingdom, Pella was embellished with impressive buildings, agora, palace, which demonstrate its magnitude in the Hellenistic period. A great part of the ancient city, houses, public buildings, sanctuaries, the palace and the cemeteries have been uncovered during the 60 years of research, between 1957-2017. Furthermore, restoration and enhancement projects started in 2002 and resulted in the enhancement of a great part of Pella. The Ephorate of Antiquities of Pella was established in 2014 and continues the research of the city focusing on the relation of the city to the sea and the surrounding landscape and its understanding and on the complete excavation of the palace and its enhancement. Furthermore, salvage excavation in the modern village brought to light small parts of the city fortification wall and many graves. The most impressive discovery is a Macedonian tomb with four chambers which dates to the beginning of the 3rd century BC.