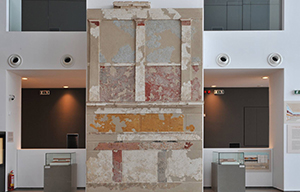 Ancient Pella, the capital of the Macedonian state for around 3 centuries, during the period of its greatest acme, stretches over an area of around 4.000 acres. The buildings are built within orthogonal town blocks of specific width and length already from the late 5th century BC, the period when Pella becomes the capital of the Macedonian kingdom. The city, which was still close to the sea at that time, near the shore of the Thermaic Gulf, succeeded an earlier settlement of the Bronze Age. The dense water-supply and sewage system, the public and private baths, and the houses testify the high living standard of the citizens, while the fortification, the palace, the agora, the public buildings, the sanctuaries, and the cemeteries contribute greatly to our knowledge on the city’s public and domestic life. Pella, still a prominent city after her conquest by the Romans (168 BC), is destroyed by an earthquake in the beginning of the 1st century BC; still, her south seaside part is still inhabited with the same town plan until the 4th century AD. The excavation work of 60 years at Pella led to the building of the new museum of Pella (2006-2009, CSF) and the restoration-enhancement of the archaeological site (2002-2015, CSF, NSRF).