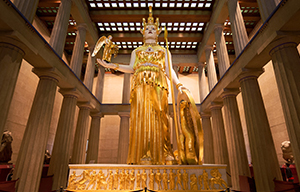 The most famous works of the greatest sculptor of ancient Greece

This paper presents an overview of Pheidias’ gold and ivory cult statues of Athena and Zeus created respectively for the Parthenon in Athens and the temple of Zeus in Olympia. The statues are documented by ancient literary sources, inscriptions, Hellenistic and Roman copies and variants and by the physical remains of their pedestals. The Athena Parthenos is dated by its building accounts to 446-438 B.C., while the Zeus is dated to the period around 436 B.C. thanks to the appearance of a portrait of the Olympic victor Pantarkes on Zeus’ throne. Technical, iconographical and stylistic issues connected to the two statues are discussed in detail.