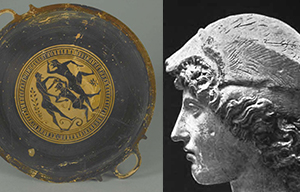 Itonia Athena and the human conscience

The case of the Boeotian cult in Koroneia

Archaeologist - Philologist (teacher), PhD Candidate at the Department of Social Anthropology and History of the University of the Aegean

The cult of Itonia Athena, although today almost unknown to the public, in antiquity seems to have had a special prestige, at least in the specific areas where it is met (Thessaly, Boeotia, Amorgos, Athens). As far as Boeotians are concerning, she were considered as their «national» deity and her sanctuary, near  Koroneia, was the center of their federal union known as Voiotikon Koinon. This article focuses on the mystery nature of her Boeotian worship, which is not certified elsewhere. It attempts to outline this almost unknown mystic cult, which seems to have been formed under the influence of Orphism. Itonia Athena, a figure who seems to combine the qualities of the Great Mother-Rhea, was associated with the chthonic Zeus of the Orphics. The cult, in which other forms are also involved, seems that was concerning the human conscience and aimed at the conquest by the initiates of self-knowledge and free will. The theory of Aristoteles about Memory and Remembrance, in combination with Platonic theories and Orphic philosophy are used as an interpretive tool in order to decipher the worship.