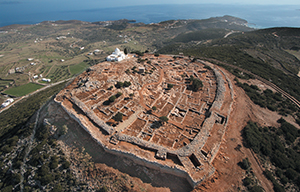 The Mycenaean Acropolis of Ayios Andreas

The most recent data

Archaeologist (Ph.D.), Director of the Excavation of the Ayios Andreas Acropolis on Sifnos

On the Hill of Ayios Andreas in Sifnos, there lies an ancient acropolis of great significance. Two main occupation phases can be discerned, the prehistoric one, presented on the current paper, as well as the historic one, with a three-century hiatus (mid-11th - mid-8th centuries BC). The earlier one is attributed to the Late Bronze Age and assigned to the Mycenaean period. Based on the excavation data it appears that its earliest phase commenced at least during the LHIIIB2 (second half of the 13th century BC) when a strong, fortified acropolis established. Undoubtedly, it constituted the island’s cultural centre, thriving during the LHIIIC period, possibly at the end of which (mid-11th century BC) started being abandoned. It was re-occupied in the Late Geometric period (second half of the 8th century BC) and thrived during the Archaic one (7th - 6th century BC). There was limited activity up until the 2nd century BC, possibly owing to the central role of the dense, signaling network of communication with towers, in conjunction with the operation of an extensive sanctuary of Artemis. Potentially, this was Minoa (Stephanus Byzantinus), referring to its glorious prehistoric past.