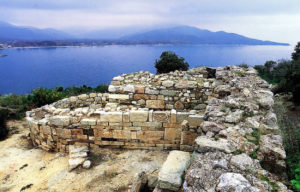 At Stagira, the well-known ancient Macedonian city (Greece), the excavation research has brought to light the remains of a major building. The shape of its plan, the material and the quality of its masonry, as well as its undoubtedly public character, make it stand out at the area of ​​this ancient city. The findings suggest a dating of the building in the period after the death of Alexander the Great. The ancient and later sources clearly refer to the erection of a monumental grave at Stagira in honor of the ancient Greek philosopher Aristotle. Despite the continuous stirrings and the rebuilding of the site, there are strong indications which support the view that this impressive building, founded in the city of the ancient Stagira, near the Agora, is the Aristotle’s grave rumored from antiquity.