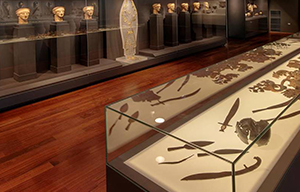 Activity of the conservator-restorers of the Pella Ephorate of Antiquities

Conservation of Antiquities and works of art, Neolithic-Modern era

Deputy Head of the Department of Conservation of the Ephorate of Antiquities of Pella, Macedonia, Greece

The inauguration of the new Archaeological Museum at Pella (2010) made the creation of new restoration facilities a matter of urgency. Equipping them took years of work. The two pottery and one metals workshops, chemistry lab and photographic studio were organised with funding from the NSRF project «Equipment of exhibition and storage spaces at the New Archaeological Museum of Pella», following all the international standards for workplace safety and completeness of work in the fields of restoration, photographic documentation and the complex task of creating bases. Particular mention should be made of the purchase of a laser cutter, which uses computer software to make precision cuts, permitting the creation of complex bases and educational objects. An integrated form was created for all the objects, which describes all the processes of restoration, photographic documentation of each stage of conservation/restoration, and the initial and final condition of the object. Special care was also taken to ensure the requisite environmental conditions. In 2014, in the framework of the temporary exhibition «Macedonian Treasures», the funerary customs of the upper class, which gave its gold-clad members splendid burials, were demonstrated through a total of 500 finds from the past 25 years from the general area of Pella and Imathia. The variety and importance of these objects and the particularity of the material were challenges for the personnel in charge of restoring and displaying them. With the closing of that exhibition, in 2016, the organisation of the current exhibition began. «Before the Great Capital» was designed to be a holistic presentation of the extended area of Pella from the pre-historic to the Hellenistic period. One of the projects carried out by the conservator-restorers in this context was the replication of part of a Bronze Age house with a clay hearth. From January of 2019 to June of 2020 the Archaeological Museum of Pella will host the new temporary exhibition of the Ephorate of Antiquities of Pella titled «Reflections of Women of Ancient Pella». In the exhibition women of Pella are presented as real women, bourgeois women, princesses, queens, slaves, mothers, priestesses, partners, locals or from other areas of the Greek world that lived in the great capital of the Macedonian kingdom. Restoration work on the architectural remains inside the South Gate and at the East Gate of the Loggos Archaeological Site in Edessa were also carried out with NSRF funding, while in the framework of the Ephorate’s salvage operations work was done on the multi-chambered tomb at Pella, the peristyle of the Dionysus House, the House of Helen, the Monumental Road and the Thesmoforion. Work was also done on Byzantine monuments, including the Old Cathedral in Edessa and the church of Analipsis at Theodoraki. The activity of the Ephorate’s conservator-restorers also included participation in Ministry of Culture exhibitions abroad, and in the Ephorate’s own educational programmes. Also the department produced some videos and one of them won the people choice award of the international competition «Museums in Short». The department also has a facedook page to show directly to the public its work. Follow us on https://www.facebook.com/pg/conservation.pella