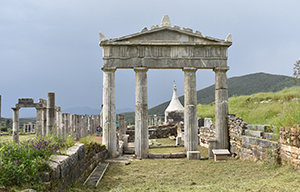 The Propylon to the Gymnasium at Ancient Messene

Director of Excavations at Ancient Messene - F. Professor of Classical Archaeology, Department of History and Archaeology, University of Crete, Greece

At the northern end of the western portico of the Gymnasium the architectural remains of a Doric Propylon were brought to light in 1998, reaching a 6,50m wide street. All the members of the superstructure (capitals, architraves, triglyphs, metopes, parts of the pediment without sculptural decoration and floral finials) were revealed scattered along the west side of its four columns. The monument was restored after many years of efforts and made its appearance in its original complete form in May 2019. Its southern side was covered with a wooden saddle roof. On its main north face are inscribed three inscriptions, two in the architrave related to the erection and its repair, and an extensive one in the three middle metopes dated to the year 44 AD, related to the donation of 10,000 dinars by a distinguished Spartan official for the expense of the sacrifices in honour of the emperors and the purchase of oil for the use of practicing adolescents. Inscribed stone bases for bronze statues of Messenian citizens and athletes surround the impressive monumental Propylon.